Timothy Raines didn’t have any rehabilitation or physical therapy after experiencing a stroke. Instead, after UAMS treated his stroke, he turned to bowling for his recovery.

Raines, 47, was watching TV in the living room of his Arkadelphia home at about 2 p.m. Nov. 24 when his wife, Kendra Raines, thought he was unintentionally doing something that was bothering her.

“He was hiccoughing really loudly,” Kendra said. “To the point where I was thinking, ‘This is annoying. Why is he hiccoughing?’ It was unusual for him, super loud. He was fooling with something on his side table. I leaned over to ask him what he was doing, and I saw his face was completely drooped. I jumped up and said, ‘You’ve had a stroke.’ He said he hadn’t had a stroke and tried to stand up, then immediately fell. I called 9-1-1.” 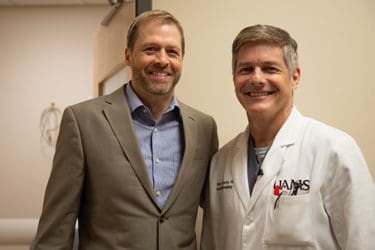 Her father had a stroke in 2015, but he and Kendra’s mother didn’t seek medical attention right away. He never recovered. Kendra knew how important timely treatment was. Timothy also had paralysis on his left side and lost his ability to speak in the course of the stroke.

After being taken to Baptist Health Medical Center – Arkadelphia, Raines and a stroke team there consulted via a live video connection on the AR SAVES network with stroke neurologist Krishna Nalleballe, M.D., at UAMS.

Next, he was airflighted to UAMS Medical Center, the only certified Comprehensive Stroke Center in Arkansas, and by 7 p.m., he was in surgery under the care of Martin Radvany, M.D.Radvany is a professor and chief of interventional neuroradiology in the UAMS College of Medicine Department of Radiology.

He performed a surgical procedure to extract the clot from Timothy’s right middle cerebral artery where the obstruction was located.

“He is young, so his blood vessels were fairly straight making the technical portion of the surgery less complicated. He was cooperative and therefore we didn’t need to use a general anesthesia,” Radvany said. “We were able to use sedation to keep him comfortable. That facilitated things. ”

Radvany said even though the alteplase did not break up the large clot, there’s evidence that patients who receive alteplase do better than those who do not. 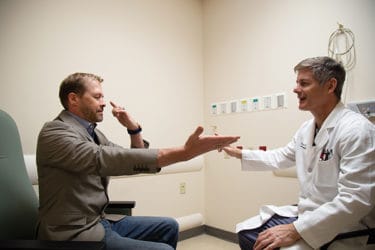 “We know from large studies that patients who get alteplase do better than patients who don’t, even when we have to do surgery,” Radvany said. “The outcomes at 90 days are slightly better for patients who have had alteplase.”

When Timothy came out of the operating room, he brought some emotional relief to Kendra when he waved at her with the left arm that had been paralyzed before.

He said he had no idea how taxing a stroke would be.  He started his recovery unable to keep a thought. He couldn’t remember three key words Kendra would use to try to boost his memory. He couldn’t say many words.

“I have the hobby of writing but couldn’t start a sentence,” he recently wrote in an email. “I’ve painted most of my life. I brought out a canvas and couldn’t paint anything. I used to build wooden projects in my shop. I struggled to think of an idea. I had such great fear that I’d never recover.”

Timothy had always liked to bowl and decided that could help. So he bowled. He bowled to build strength in his still weak left arm. It also helped him regain muscle control and his ability to think.

“I started looking at bowling like a puzzle or even a mathematic equation,” he wrote. “I triangulated the speed of the ball, the revolutions I would need to torque and the lane position to increase my scores.

“For example, if I throw a 16-pound bowling ball, 15.50 mph with a rate of 450 rpm, straight down the 10th board, it will create the best inertia to knock down the most pins. If I lay the ball down on the 28th board, angled outward to the fifth board, I will have to increase the speed to 16 mph and increase the revolutions closer to 600 rpm. The repetition of trying to maintain the right equations seemed to be such a great workout both for my strength and my brain.

“I practiced so many different equations that my bowling scores jumped through the roof!”

Timothy’s only lasting deficit is some difficulty from time to time in finding a word he wants to say, yet the ending to Timothy’s story has been a happy one

“UAMS is fantastic,” Kendra said. “I cannot sing its praises enough. He’s had other health issues. This was by far the best experience we’ve ever had.”